There’s a new pride in the DMV, and it has been sparked from an unlikely source…love! Meet Amber Levy! 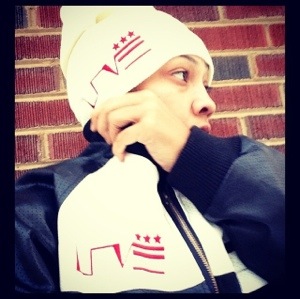 Amber is a graduate of Suitland High School, and a veteran of the US Air Force, serving on the Security Forces at the Barksdale AFB, in Louisiana. Once she returned home from service, Amber indulged in her artistic gifts through her paintings and body art. Her abstract artistic expressions put her in high demand to showcase her work throughout the DMV, and nationally. 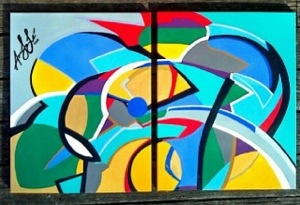 In 2013, she decided to create a brand extended from her own name, Amber Jade Levy, and built AmJaLe. This brand, in addition to her visual arts gifts, expanded more on her gifts for fashion. For the fashion brand, Amber wanted something that everyone can take pride in…something local…and something that filled her supporters with positivity, and love. Thus, the LoveDC brand was created.

Just like her visual arts, the LoveDC logo was created abstractly, as the the “E” in “LOVE” is constructed using the DC flag! Starting with cutting-edge designs and color schemes on the trendy and popular SnapBack style hats, the LoveDC motto started to spread around the DMV like wildfire…especially with the local favorite of the NFL’s Washington Redskins’ color schemes! Soon after, Amber expanded her LoveDC fashion brand into beenie hats, t-shirts, hoodies, sweatshirts, and even motorcycle jackets!

We had a chance to catch up with Amber, and learn more about herself and her brands:

Q: What part of the DMV are you reppin’?
A: Maryland for the most part because I was raised there, but DC is my birth place so I can still claim the city sparingly.

Q: What influenced you to engage in your talents/gifts?
A: Hard times really. Didn’t like the circumstances I grew up in. God allowed me to use various outlets to release anger & I discovered I was actually talented in many areas.

Q: How has your community influenced you, and vice versa?
A: I’ve always looked at the community like family. It’s like you’d rather be elsewhere but at the end of the day they’re all you’ve really got. Some you like some you don’t but they’ve helped to shape me in both positive and negative aspects. Negatives, however, turning to positives as I aged.

Q: If there’s anything that you would want your peers & supporters to know about you (assuming that they don’t already), what would it be?
A: I’m not as mean as ppl think lol… I’m just very serious about the caliber and quality of my craft, and what/whom I choose to support should reflect nothing less than what I produce. Right now I’m a full time care giver for my grandmother and it consumes about 90 hours a week, so I ask that my audience and supporters to please be patient with me, because I am only inching along with my projects due to my schedule.

Q: What’s next?!
A: Geeez where to begin?! But immediately up next on the list is to drop my couture line…Ajlevy8 (Alleviate). Not sure how I want to spell it yet though, abstractly or in plain English. But, hopefully I’ll be dropping that before spring. I’m going to try and eventually turn LoveDC into a non profit organization, where local designers can collab with the brand, and high school/college students can get internship hours by helping out with designs, manufacturing, and marketing the products. I really want the proceeds to help dc communities and programs. But that’s the ultimate goal for LoveDC. Websites are coming soon also. I don’t have a physical team quite yet, but I do have loyal supporters, such as yourself, who actually keep me motivated during times when I want to throw in the towel. Just knowing I have supporters literally keep me moving forward!

As the LoveDC brand is still making its way through the DMV, we’re definitely looking forward to the new Alleviate brand also! In the time being, while her site is still under construction, you can follow Amber and her latest products on Instagram & Twitter (AmJaLe). You can also reach out to her, via email, for any products that you would like to purchase, at amjale.designs@gmail.com.