Posted by tagdmv on May 5, 2014
Posted in: Album Review, Events, Music, Spoken Word. Leave a comment

Saturday evening, May 3, 2014, at the Artiz Gallery Lounge in Mt. Ranier, MD; a group of family, friends and supporters are gathering for an intimate, yet exciting event. DMVPOET is finally recording his debut spoken word album, Heart & Mind of a Gemini. 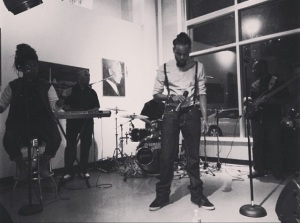 The evening starts with mingling, food, drinks and smooth grooves from the In Da Cut Band, which consists of keyboardist (and founder), Clayton Morrow, drummer, David Suggs, and bassist, Pap Mensah. After some time of connecting over good food and good times, the show began as local media showman, Rich Rocket, welcomed everyone as the evening’s host. The first act to the stage was singer Davonne D’Neil. She rocked the stage with her band while performing originals and covers in her own spin. The crowd was grooving as she put Hip-Hop/R&B spins on songs, such as Adele‘s “Rolling in the Deep”.

Up next was the man of the hour, DMVPOET! He blessed the stage with excitement and grace, as he prepared to share and record material with us that had been years in the making. His accompaniment included artists that already impressed the crowd previously, In Da Cut as his band and Davonne D’Neil as his accompanied singer. Here’s what you can look forward to on the album:

“Politician”: DMVPOET deemed this as his theme song, keying in on what it’s like to grow up in the DMV.
“Fallen Star”: This is a personal track about the friends that he’s grown up with, yet lost along the way.
“Trayvon”: A touching tribute song to another “fallen star”, Trayvon Martin.
“Rebirth”: A love song that embraces “the beauty of you” as “Isis”; DMVPOET notes that this song was “written for all the women that holds up someone…everyone has an Isis”)
“Knees Remain Closed”: A song about the sensitivity of a young girl losing her virginity and the emotional pain that comes along with it.
“Cold Sheets”: Could be considered a follow-up to “Knees Remain Closed”; DMVPOET notes that this song is about “a cycle where the love was never there, but the physicality was…this piece represents the man or woman that doesn’t necessarily know how to get out of it”.
“Inadequacy”: A track about the pressures of trying to live up to, often times, impossible standards and the feeling of heartbreak that comes along with it.
“A Letter To You from Me”: A way to close out the album on a high note; an uptempo piece that celebrates life and love. 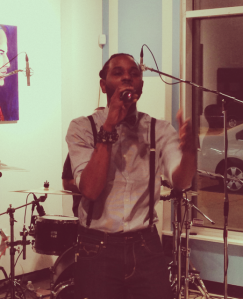 As the evening came to a close, DMVPOET‘s closing remarks to his supporters expressed how he was, “so proud to have given you a piece of me from the last 7 years”! Be on the look out for Heart & Mind of a Gemini this coming Fall 2014, and also look out for Davonne D’Neil‘s 3rd solo project, Round Midnight, which will be out this August 2014. To keep up with the artists featured in this event, follow them on their social networking sites (including Facebook, Instagram & Twitter), and be sure to check out www.DMVPOET.com for album updates, and spoken word blessings near you in the future!