In Case You Missed It: Esperanza Spaulding at the Lincoln Theater

Last night, in the below freezing temperatures of evening, stood a mass line of anxious musical supporters awaiting to see a FREE (yes free) concert. The line extended from the doors of the Lincoln Theater, down pass the D.C. staple, Ben’s Chilli Bowl (and it’s extended branch, Ben’s Next Door), and wrapped around the block of 12th & U St. Whom was the guest for the evening? Only the cool, calm and collected Grammy winning artist herself, Esperanza Spaulding!

The atmosphere was filled with good vibes and positive people, no matter how freezing it was outside (and inside) of the theater. As Esperanza graced the stage with her presence, her witty, yet down-to-earth, personality shined through her during and between her songs. In fact, as her hair style for the night was unusual for her brand as she rocked a sophisticated straight and pulled back look, she actually told the audience (in a joking manner of course) that her “Afro comes out for PAYING guests”! Not one to have a big band with her, she started her set with her and her acoustic bass, and a drummer with only a snare. Simplistic, yet powerful! For the next song, the drummer moved to the kit, and also entered a keyboardist. All was well and soothing as the crowd was enjoying their “Evening with Esperanza Spaulding”, as the event was named. 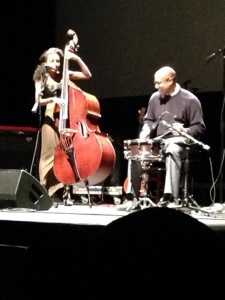 Esperanza conversed with her audience through her songs, and after a few, there came a little more to this event than just Esperanza. The conversation shifted to the real reason that everyone attended is “FREE” concert; it’s not like this wasn’t expected (although there were probably some that did happen to miss the “Spotlight on Guantanamo” in slightly finer print above “An Evening with Esperanza Spaulding” on their ticket(s).

As the musicians depart the stage, onto the stage enters a man to introduce Van Jones, political commentator and host of CNN’s “Crossfire”, to facilitate a panel discussion, with a few other guests, on Guantanamo Bay. Just in case you haven’t heard, Congress has recently eased restrictions on transferring prisoners out of the camp. Esperanza, herself, expressed her passion for wanting the US to completely shut down the infamous camp grounds, and that is why she agreed to host last night’s event. 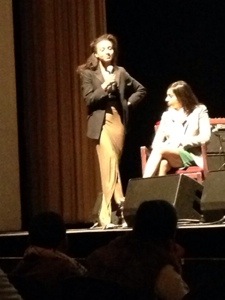 After getting a bit serious with the panel discussion, it was finally time for more music. This time, Esperanza was joined on stage by Howard University’s own featured jazz ensemble (and also fan favorites during season 2 of NBC’s favorite musical geek show, The Sing-Off), Afro Blue. As they sing a few songs, with Esperanza switching it up from acoustic to the bass guitar, they topped off the night with her single, “Black Gold” (which she sings with Algebra Blessett on the track).

All was well by the end of the night, which was finally capped with a video that she made called “We Are America”, which protests and calls for the extinction of the Guantanamo Bay camp. The video also features A-list celebrities, such as Harry Belafonte, Stevie Wonder and Janelle Monae. If you would like to learn more about Esperanza’s movement, visit this link and watch the video: http://vimeo.com/m/79294714. All-in-all, it was a great night of great music, with a side of politics. After all, it is still DC! 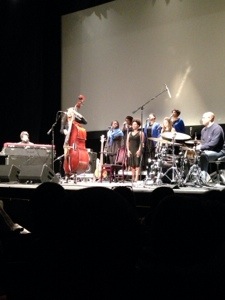