Yesterday, was a day to definitely remember in the world of entertainment.

Earlier in the afternoon, came the news that Oscar-winning dramatic actor, Philip Seymour Hoffman, had passed. The suspected cause is of an apparent drug overdose. Hoffman’s dramatic career has been very respectable from the time that we saw him in Twister as the lovable, free-bird, Dusty, to the serious game-changer roles in movies such as The Talented Mr. Ripley & Capote, to his current act in the blockbuster series, The Hunger Games.

If the cause is true (according to the autopsy), this will be one in the VERY many unfortunate deaths of tragic geniuses in the world of the arts. Like his counterparts, Mr. Hoffman’s gifts will be greatly missed, but his legacy will live on through his pre-existing bodies of work. 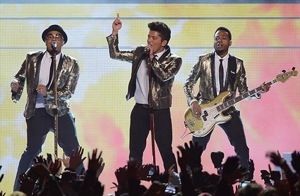 Later that evening, the sad news continued, only it was in a different realm. An event that millions of people worldwide have been awaiting to see on this day, was none other than Super Bowl XLVIII! The matchup was destined for greatness as the #1 offense, Denver Broncos, and the #1 defense, Seattle Seahawks, faced off head-to-head. The high anticipation quickly fizzled, as the Seahawks showed up and showed out, and the Broncos, well…were really nowhere to be found.

However, there was a very bright side to this evening (aside from, yet positive weather spin). There was a trending social media post that said it best…”Apparently, there’s a football game at the Bruno Mars concert”! A good play on words, yet truer words were never spoken. For those whom were unaware of Bruno Mars, or were not convinced that he was “Super Bowl Halftime Show” worthy, they were a believer by the end of this show. Mars captivated his audience (in-person & via television) from the opening of his rockin’ drum kit solo, through his up-tempo, hit tunes (which included a very James Brown-esque dance break), to performing with his special guests (the always hip and rockin’ Red Hot Chili Peppers) on their classic hit, “Give It Away”, and finally ending with a heart-warming tribute to America’s military soldiers with his first hit single, “Just the Way You Are”.

The timing could not have been more perfect (or calculated), as Mars had just released dates a couple of weeks ago for his second round of tours, called the “Moonshine Jungle Tour”. Great news for the DMV, he will be back on July 11th at Jiffy Lube Live, and will be joined by rising soul singer, turned pop/commercial success, Aloe Blacc! Tickets have gone on sale today, and are now available on Ticketmaster.